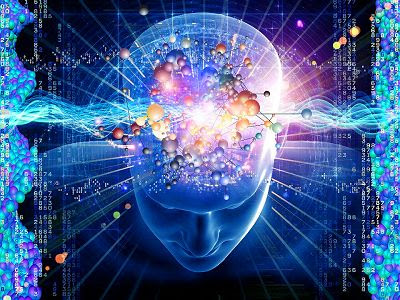 In most ancient spiritual traditions, the spiritual eye, located between the eyebrows, is connected to the pineal gland in the center of the brain. Here are steps to take that clear and rejuvenate this mystical "eye" for higher perspective and sensitivity to cosmic energies:

1) Breathing - Any conscious breathing practices activate the pineal and pituitary glands as well as stimulate the flow of cerebrospinal fluid (CSF). Breathing is said to ionize the CSF and therefore increase its potency.
2) Tapping - Gently tapping your forehead in between your eyebrows sends a wave directly back to the pineal gland, activating it.
3) Chanting - Just like tapping, chanting sends vibrations into the skull, activating the pineal and other glands and energizing the CSF. Any spiritual chants will do this, as the ancient rishis were very scientific in their development of spiritual practices. One of the simplest is simply chanting Om. You can also use singing bowls.
4) Tongue Mudra - Reaching your tongue toward the back of your mouth (toward the uvula) activates the pituitary gland and, through its physical and chemical connections, activates the pineal gland and hypothalamus as well.
5) Being in Darkness - When the eyes have no light to process, the brain autommatically increases energy to the pituitary. Researchers have studied yogis who meditate in complete darkness for weeks, and who can see in the dark. It is postulated that the pineal gland picks up energies from objects, translating them into images in the brain.

QUANTUM HEALTH TIP: Use our Zen Meditation Elixir to help energize the pineal gland and keep it healthy.

Science Wrapping Its Head Around Breatharianism 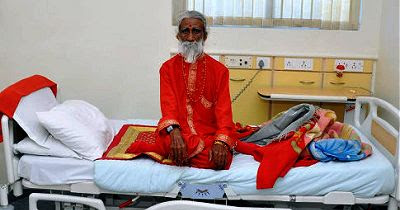 Breathariansim refers to the practice of sustaining oneself without food. This concept is not new; in fact, for thousands of years, various cultures around the world have written of this ability. Nikola Tesla said of this phenomenon:

My idea is that the development of life must lead to forms of existence that will be possible without nourishment and which will not be shackled by consequent limitations. Why should a living being not be able to obtain all the energy it needs for the performance of its life functions from the environment, instead of through consumption of food, and transforming, by a complicated process, the energy of chemical combinations into life-sustaining energy?

Prahlad Jani, a local of Ahmedabad, India, claims that at the age of 11, the Hindu goddess Amba appeared to him and told him that he would no longer have to eat food. He has apparently lived in a cave since the 1970s, and claims not to have eaten anything for most of his 81 years (as of 2012).

Jani was tested in 2003 and in 2010 at Ahmedabad’s Sterling Hospital by Dr. Sudhir Shah and his team of doctors. During the first test, which took place in 2003, Jani was monitored 24/7 for 10 days by hospital staff and video cameras, where it was confirmed that he neither ate nor drank. He also did not show any physiological changes — a fact which, according to modern day medicine, should be impossible.

He was tested again at Sterling Hospital in 2010 from April 22 to May 6, observed by 35 researchers from the Indian Defence Institute of Physiology and Allied Sciences, among other organizations. This time, Jani did not eat or drink for two weeks. As with the previous test, he exhibited no ill effects from this abstention. A statement from a scientific group (which included the Defence Institute of Physiology and Allied Sciences) given to ABC News back in 2012 reads as follows:

We realized that, if this whole phenomenon really exists in a human being even for 15 days, it would have immense application in unraveling secrets of medical science and its application for human welfare. We again make it clear that the purpose of this study was not to prove or disprove a person, but to explore a possibility in science and study a new phenomenon. 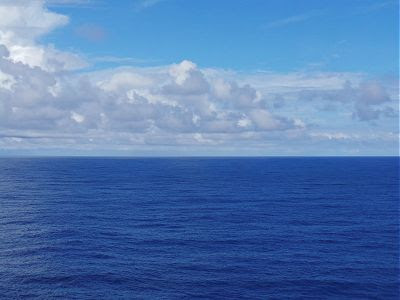 We know intuitively from experience that it’s healthy to be near the ocean. Now science is demonstrating that the ocean inspires creative thinking, reduces anxiety and promotes compassionate thinking.

The latest research is revealed by scientist and marine biologist Wallace J. Nichols in his latest book, Blue Mind: The Surprising Science That Shows How Being Near, In, On, or Under Water Can Make You Happier, Healthier, More Connected, and Better at What You Do. “We have a ‘blue mind’ — and it’s perfectly tailored to make us happy in all sorts of ways that go way beyond relaxing in the surf, listening to the murmur of a stream, or floating quietly in a pool.”

“Blue Mind” is defined as “a mildly meditative state characterized by calm, peacefulness, unity, and a sense of general happiness and satisfaction with life in the moment. It is inspired by water and elements associated with water, from the color blue to the words we use to describe the sensations associated with immersion.” We experience this state when we sit near water and gaze out at it. It induces a mindful state in which the brain is relaxed but focused.

Researchers at the University of Exeter found that people are healthier when they live closer to the English coast. The researchers looked at data from 48 million people in England from the 2001 census, comparing how close people lived to the sea with how happy they said they were.

Even just a view of the ocean can boost a person’s mental health. A study carried out by researchers at Canterbury University, Otago University, and Michigan State University in the USA, looked into the relationship between mental health and exposure to green and blue space. Blue space refers to the visibility of water. The study found that just being able to see the ocean contributes to wellbeing, and lower stress levels.

QUANTUM HEALTH TIP: Next time you visit the ocean, take a bottle of our E-1 Stress Relief formula to heighten the effect of the Blue Mind.

1% Per Day Return on your Energy

Pure Energy Rx has affiliated with USI Tech, the crypto-currency trading company. USI Tech has been currency trading for the world's biggest banks for over 13 years, and now they are trading for the little guy. USI Tech pays out an average of 1% PER DAY. All you have to do is register (for free), submit your ID verfication, buy some Bitcoin, and spend as little as $65. USI Tech uses an A.I. (Artificial Intelligence) algorithm to transact its trades in what's called "High Speed Trading" (HST). This is how banks and billionaires compound their money so fast. And now all of us can do the same thing. Check out the video HERE, and register today!

EMF Transformers counteract radiation overstimulation from all electronics, including the latest smart phones. Modern cell phones barrage the brain with electromagnetic radiation—shown in laboratory tests to cause overstimulation in parts of the brain. Research shows that Energy Tools International EMF Transformers actually counteract the effects of radiation-caused hyper-stimulation in the brain. They give you this ability for your own benefit and for all your family members. Optimized with scientifically-tested Vital Force Technology, EMF Transformers counteract the over-stimulating effects on the brain of all smart phones--even the newest and most powerful ones. What's more, they're effective on all electronic devices that emit an electromagnetic field! You'll definitely want to order some today for every device you own! Use discount code FACEBK20 for 20% off! MORE INFO / ORDER

Gem Elixir for the Month
Turquoise
"Stone of Healing and Protection"

Physically: Considered a "profound master healer". May strengthen the entire anatomy and ease all conditions. May enhance the physical and psychic immune systems, regenerate tissue, stimulate absorption of nutrients. All chakras, meridians and subtle bodies are aligned and strengthened. May protect against environmental pollutants.

Posted by Boyd Martin at 4:43 PM No comments:

Patience as a Spiritual Practice 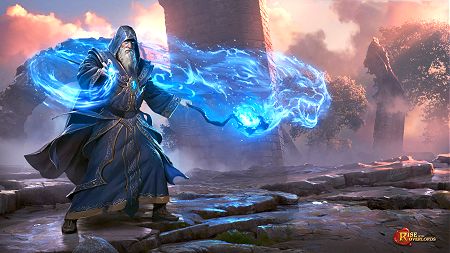 Time is a weirdly funny thing when it comes to us humans. It can drag, it can fly by, it can "take forever" or "happen in an instant". Because of this, time is the first thing we usually associate with being an illusion--once we accept this physical realm as an illusion, anyway.

In my current live-in care-giving gig for 93-year-old Hilbert, I've become more sensitive to time awareness. Hilbert spends his days mostly chair-bound, rarely able to leave his apartment without a lot of help to go to the doctor's office. He has a quip he likes to make: "Another day another 15 cents," as he grins. He ruminates freely about how the "pace of life" has changed so much, and how people have seemed to become so self-absorbed and un-interested in their own activities.

I argue that the stresors of life have rendered so many of us wrapped up in economic concerns and the relational backwash of it, that we are unable to pull our heads out of you know where. It seems the faster technology pushes us to go, the less amount of attention we all have to live full, expansive lives, unencumbered by the worries of modern life.

On a quantum level, of course, time becomes just another dimension--such as width, length and height. In fact, time can run backwards, or suddenly turn into a future that affects a current state. These are considered common quantum quirks. These effects are happening to our human experience, too, but we have that handy tool--the mind--to keep everything in a linear flow, when in Reality, there is no such thing.

Yet, as a major part of the human experience, the forward flow of time is a basic reality, without which there could be no commerce, no language, or perception of manifestation through personal efforts or power. In other words, time affords us a sort of linear playground upon which to express ourselves and to actualize the experiences we desire. This is where the practice of patience comes in.

As some wise person said, "Time exists so that everything doesn't happen at once." True enough, yet if we take into account imagination, it's not quite so true. We have desires that first instantly appear in our imaginations, which then begin their descent into our physical experiences. The "imaginary" fulfillment of a desire is the instantaneous existence of the desire as a certain vibration, or vibratory rate. If we can "hold" that manifestation in our imaginations long enough, the vibratory rate of it will begin to match a vibratory rate of the desire manifested. The crux of the matter is time, of course.

Most of us surround our desires with wall after wall of judgments and conclusions that all but insure the desire remains only in the imaginary realm. By opening up to the possibility of our desire actually appearing in the physical world, then the primary mental and spiritual practice becomes Patience.

We wait. We maintain. We watch. During this sensitive "coalescence" period, we remain committed and pure of intent with our birthing desire. This allows all sorts of blockages to arise to be cleared. Everything from the "how many more miles, Daddy?" to "This is taking forever", to "What if it NEVER happens?" Yes, what if? Good question. The answer is that this is a moot question, because doing the spiritual work of actualizing a desire, that question cannot be entertained, since by asking it, more and more time is injected into the actualization of the desire. Since we are immortal spiritual beings, we actually have "forever", so again, the question is moot.

Treat the practice of patience as the "secret sauce" to the manifestation of your desires, and watch the magic happen!

Posted by Boyd Martin at 4:37 PM No comments: